Ambient lighting with a strip of SK6812-RGBW LEDs

This is intended as an ambient LED-strip lighting for my hallway. It serves a dual purpose: 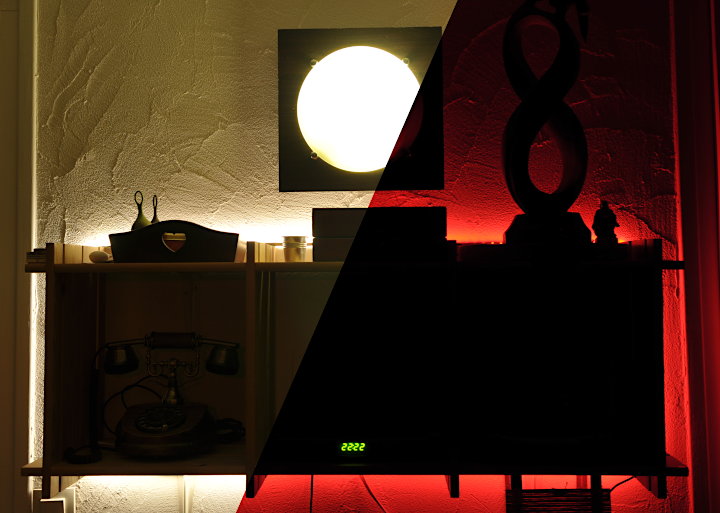 This lighting is based on a SK6812-RGBW LED strip. Each pixel on this strip has, in addition to the traditional RGB LEDs, an extra “warm white” LED which enables a better color rendering than the R+G+B combination. The strip is almost 3 m long, with 60 LEDs/m, for a total of 175 LEDs. In addition to the strip, the device has:

Some measurements were needed for choosing the power supply and for tuning the firmware.

The LDR is connected in series with a 10 kΩ pullup resistor. It sits inside the lamp, close to the bulb, in order to be more sensitive to the bulb light than to daylight. The measured illumination is compared to two thresholds:

In order to choose the appropriate thresholds, I took data for three days with an Arduino (for making the measurements) and a Raspberry Pi (for data logging). Here are the results, shown as resistance variations as a function of time: 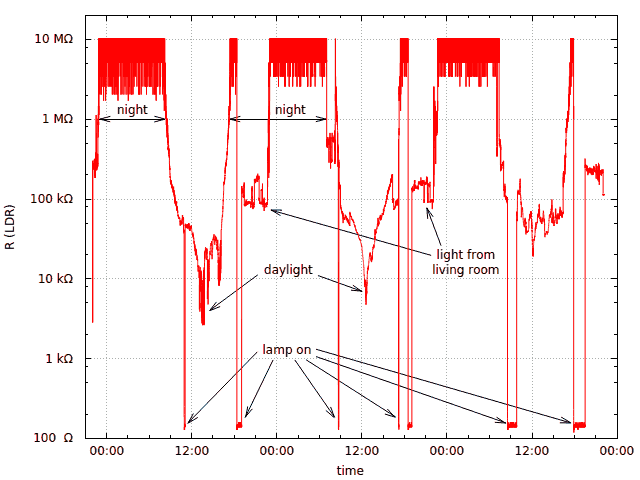 This graph shows that:

Mesuring the current draw on a multimeter.

I measured the current draw as a function of the number of lit LEDs and their color. This was done on a 300 LED strip (5 m at 60 LEDs/m). Only a few LEDs were lit in this experiment because the strip was powered from my PC's USB port. Here are the results: 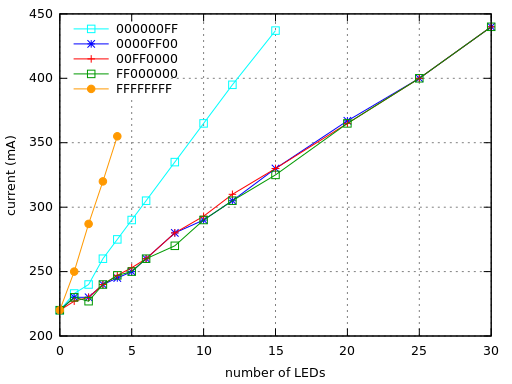 A linear regression on this data gives the current per LED as a function of the (R, G, B, W) color:

This led me to choosing a 4 A power supply in order to have some safety margin.

The circuit built on a perfboard. 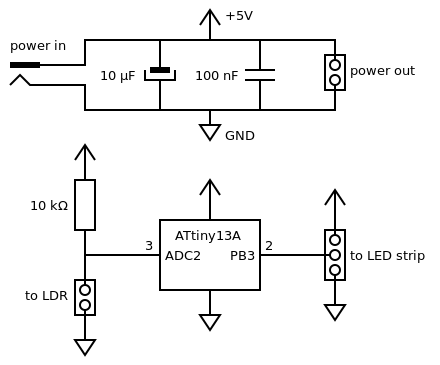 On the top, the power handling. On the bottom, the data path. It should be noted that the LDR sits inside the hallway lamp, hence the connector labeled “to LDR”. Note also that the strip is connected to this circuit from both ends: one end gets power and data (from the three-pin connector labeled “to LED strip”), the other end gets power only (from the two-pin “power out” connector). Powering the strip from both ends is a way to limit the resistive losses along the strip's power bus.

The SK6812 LEDs are very similar to the well known WS2812 and are driven in the same manner. In addition to the RGB version, these are available in an RGBW configuration, with a white LED which has a better color rendering than the RGB combination. The version I have is “warm white”. One must send 32 bits per pixel, in the sequence: green, red, blue, then white.

Libraries meant for driving WS2812s often support the SK6812-RGBW chip, but they require a large amount of RAM (4 bytes per LED) for storing all the bits to be sent. However, I wanted to drive the strip with a minimal setup, using an ATtiny13A, which has only 64 bytes of RAM.

Using the information from the second link, I managed to drive the strip from an ATtiny13A clocked at 9.6 MHz. Given the low clock frequency, I had to generate the pulses with assembly code. A “zero” bit is transmitted as a short pulse, generated by:

this pulse is two CPU-cycles long, i.e. 0.208 µs. A “one” bit is transmitted as a long pulse, having four wait cycles, like this:

In order to avoid the program quickly switching the LEDs on and off when the light level is close to a threshold, I added some hysteresis to each of the thresholds. These hysteretic thresholds control the transitions of a finite state machine with the following states:

Here is the version of the firmware I am currently using: