This is DIY, analog, 24-hour, one handed wall clock. The sole hand points downwards at midnight and upwards at noon, so that its movements mimics the path of the Sun in the sky. We can optionally stick a piece of paper on the clock’s face, with drawings evocative of day and night activities. 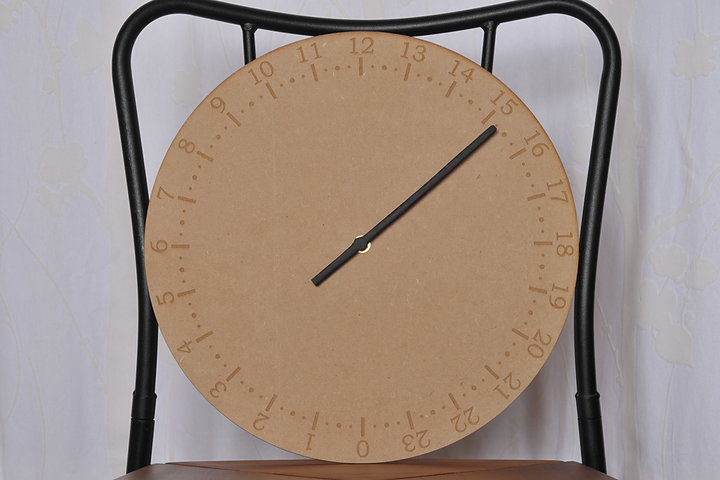 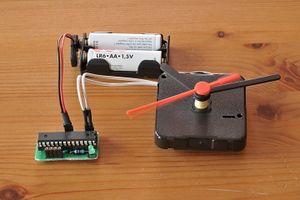 This is based on a standard quartz clock movement, modified in order to be driven by a microcontroller. The microcontroller is mounted on a stripboard circuit and powered at 3 V by a pair of AA cells. The motor is driven by current pulses of alternating polarity. This is very clearly explained on this blog post, which was my main inspiration for this project:

Controlling a clock with an Arduino, by mahto

In order to have a 24-hour single hand clock, we only have to:

The clockwork case is easy to open with a screwdriver. Once open, all the parts (gears and PCB) can be removed with no tool. They can also messily fall on the table if one is not cautious. The PCB, which comes with the motor coil, has to be removed. Then:

Here are a few pictures taken while putting it back together:

I initially went for an Arduino-based clock, just like the project by mahto cited above. A first try with an Arduino Uno showed that this was not feasible. First reason is the power drain of the Arduino which, at around 40 to 50 mA, is incompatible with battery operation. The second reason is the Arduino time base being a ceramic resonator, far too inaccurate for a clock.

I then went for a bare microcontroller. I choose an Atmel AVR ATmega48A because:

The only noticeable difference between the 48A and the 328P is the amount of memory: 4 KiB of flash and 0.5 KiB of RAM on the 48A, vs. 32 and 2 KiB respectively on the 328P. But the 48A has more than enough resources for this project, and it costs next to nothing.

Here is the circuit diagram: 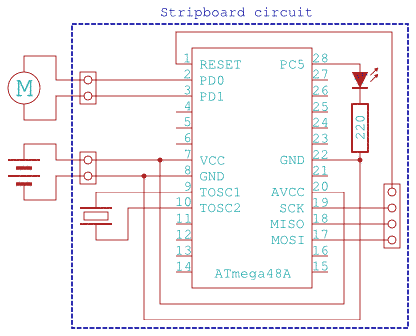 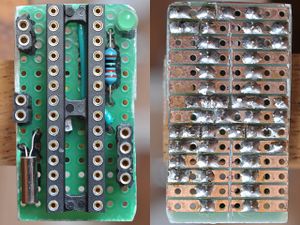 The motor is driven by pins PD0 and PD1. The LED on PC5 is for checking the MCU (short for “microcontroller”) is working: it blinks three times at power-up, then goes off in order to save battery. The connector on the right is for programming the MCU.

Compared with mahto’s schematic, this one has two simplifications:

Here are the pictures of both faces of the circuit. Pin 1 of the MCU would be on the top of both pictures. In order to save space, three jumpers (GND, VCC/AVCC and RESET) run below the DIP holder. Only two are visible on the pictures. The RESET jumper runs between the pins of the DIP holder.

The AVR is used in its default fuse configuration, which means it will run at 1 MHz from the internal 8 MHz oscillator prescaled by a factor 8.

Using the internal oscillator makes pins 9 and 10 available for connecting the quartz crystal to the asynchronous counter. Those are the TOSC1 and TOSC2 functions of these pins. Furthermore, at this frequency the MCU works over its whole range of supply voltages, from 1.8 to 5.5 V (fig. 29-1, p. 303 of the datasheet). The lower 1.8 V limits means it can be power from a pair of 1.5 V cells until the cells are practically exhausted.

The AVR has a peripheral named “8-bit Timer/Counter2 with PWM and Asynchronous Operation” documented on section 18, p. 141. This will do most of the work. It includes:

The AVR has several sleep modes (c.f. section 10, p. 39) for reducing power consumption. The one we will use is POWER_SAVE. This mode shuts down practically everything in the MCU except for the Timer/Counter2, which is the wake-up source. In this mode, the supply current is around 2 µA.

Having the counter run asynchronously relative to the system clock requires some special care: after accessing any of its configuration registers, and before putting the MCU to sleep, we must check the ASSR (Asynchronous Status Register) and wait for the *UB (“Update Busy”) flag related to the previously accessed register to be clear. Inside an interrupt handler, we must do a dummy write on one of the configuration registers and, once again, wait for the *UB flag to be clear. C.f. section 18.9, p. 151.

In order to compensate for the discrepancy between the real and nominal quartz frequencies, we perform a calibration, then use the following algorithm, similar to Bresenham's algorithm for drawing slanted lines:

where MICROSECONDS_PER_PULSE is 24×10⁶ (for sending a pulse every 24 seconds) and MICROSECONDS_PER_INTERRUPT, nominally 8×10⁶, is tuned to the measured quartz frequency. This ensures that the average pulse frequency is correct.

The first batteries (a pair of no-name AA cells) lasted from June 2012 until November 2020. Here is the time-evolution of their voltage:

These cells lasted almost eight and a half years, which proves that the POWER_SAVE mode is really effective for saving energy.

I compiled this on Linux with avr-gcc. For uploading into the AVR, I am using my Uno as an ISP programmer. I have read contradictory information on the Web about this method. I should say it works for me provided I:

With the following Makefile:

Given the limited resolution of the clock display, calibrating its quartz is an exercise in futility. But it is fun, which is a valid enough reason for doing it. ;-) Calibration is performed by compiling the program in PPS mode (with #define PPS, PPS meaning “pulse per second”), and comparing its PPS signal with an NTP server.

Link to the PC via Arduino

I am using the Arduino for relaying the PPS signal from the AVR to my PC. The AVR and the Arduino are connected as per the following schematic: 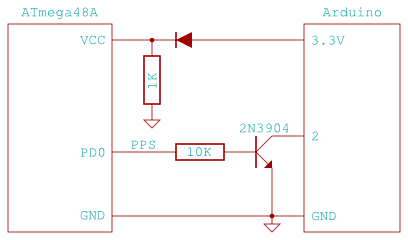 Here, the diode and the associated 1 kΩ resistor feed the AVR with a supply voltage close to 2.7 V, which simulates the supply of half-drained cells. The transistor and the resistor at its base shift the signal from 2.7 to 5 V. These four parts (diode, transistor and resistors) are connected on a breadboard.

It should be noted that the internal pullup on pin 2 of the Arduino has to be activated. The level shifter inverts the signal: the rising edges of the PPS are detected as falling edges by the Arduino. These edges trigger an interrupt that sends a single character (a dot) on the serial port. Here is the code:

The PC, running Linux, reads the PPS signal and compares it with an NTP server using the two programs below:

The PC clock is left free-running, with no local NTP server. We then get two files with the time differences (PPS − PC_time) and (NTP_time − PC_time). Taking the difference between these two files gives (PPS − NTP_time), which is the interesting data. 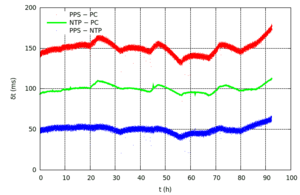 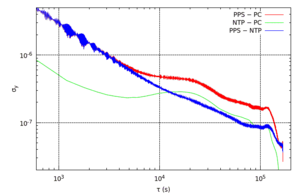 Here is the data:

In this graph, the average drift has been estimated by linear regression and subtracted from the data. This is in order for the drift fluctuations to be visible. On the (PPS − NTP_time) series, the average drift was +6.5 ppm, i.e. the clock would be roughly 3.4 minutes fast over one year. This drift rate is generally acceptable, but now that we know it, we will fix it. We compute the time elapsed between interrupts, and we define 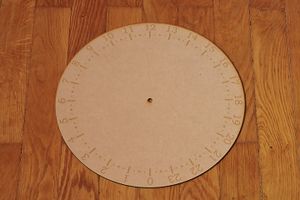 The face is 350 mm in diameter. It has a 7.5 mm central hole that fits the threads around the hand axes. It has been engraved and cut at the Fab Lab de La Casemate on MDF, using a laser cutter, from this SVG file:

This file was generated by a PHP script looping over the hours. Here is the source code of this script:

The face diameter can be customized by changing the global scale factor (scale(2.0669)) on line 13 of the SVG, or line 26 of the PHP file. The diameter of the central hole (the circle line 16 on the SVG, line 29 on the PHP) has to be adjusted accordingly to still fit the threads.