Building of a giant Tux 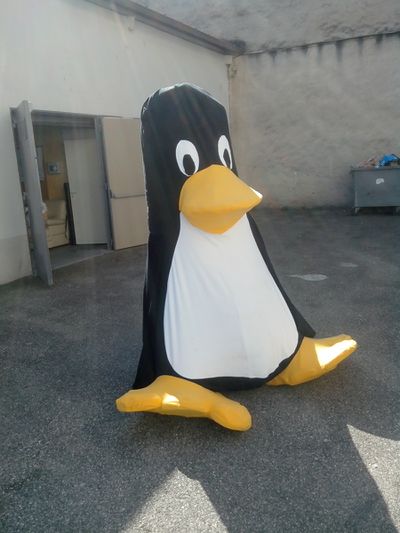 « They did not know it was impossible so they did it. »

The origin of the project

In preparation for the Guilde's twentieth anniversary, a small handful of members set themselves a challenge: build a giant Tux. Of course, as is often the case at the LOG, they had absolutely no idea what they were doing.

First step was making a small penguin, like the one on free-penguin.org, to learn about sewing, see how it goes and if we can build a very big one. 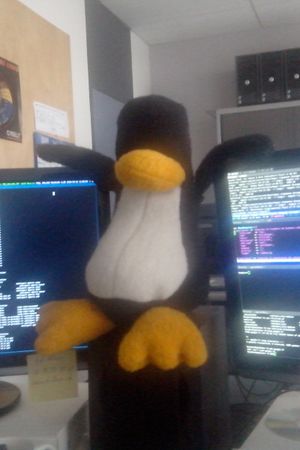 The pattern available on free-penguin.org is designed to be printed on A1 sized paper. The first step was to print it on many A4 sheets that were linked together to create sewing patterns for each part. Patterns were cut in both paper and cardboard. The former is sturdier than the latter, but may be less practical with complex parts if too thick.

The first test was done with boiled wool. This fabric is very thick, sometimes difficult to sew but it looks good for a small penguin. A dual feed presser foot may be of help here, but you don't have one, not pressing too much is enough. The major drawback is the inflated price (30€/m, in 1.5m wide fabric roll) that made us chose another fabric for the next builds.

On the whole the joining went well. There was a problem with the feet that were kept apart until the end, and that are quite difficult to sew to the body in a satisfactory manner. This problem is solved in v2: the legs are not joined separately from the body, but by sewing the upper part of the leg to the body before joining it with the lower part. Thanks to a hole in the body's fabric sewing can easily be made on the reverse side. 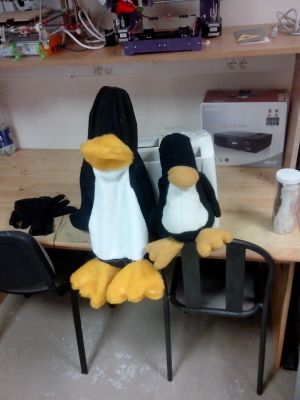 To solve the price problem, fabric was changed from boiled wool to cheep fleece for the black of the body, a fabric close to fleece but softer for the white of the bib, and some kind of fake fur for the yellow parts. At first we wanted to build it at the same size as the previous iteration, but the amount of fabric available allowed us to test the enlarging of the pattern and the new fabric at the same time.

The enlarging was made approximately, projecting the patterns on the wall, and adjusting the size to be sure that it fits. The result was a scale factor of something like 1.72x. The sewing was a bit more laborious, as the fabric was harder to unsew in case of mistakes.

Those 2 tutorials (in French) were useful:

It is interesting to read them both before starting in order to get into the swing of things. We will not detail all steps as they are already covered in those links but only precise points where we had difficulties scaling up.

Cutting out the patterns

The first main difficulty when scaling up was getting the patterns right: joining 9 A4 sheets was boring, imagine what it would be like for a 2m pattern !

The first idea was to go to a specialized publisher. Thus we tried to fit all pieces on 4 A0 sheets, as the pattern available is not optimized to be printed as is (a major portion contains text and pictures on the right). Libre Office Draw, even if convenient for most people, was annoying to use: impossible to rotate pieces (those were groups of shapes). The export to Gimp/Inkscape was not really better. Please note that the team in charge is rather stubborn when it comes to GUIs, that may be why it became so difficult.

A second option, much more convenient and cheaper was discovered later: the use of a projector. So we could do without printing by projecting directing on the fabric that was hanged on the wall: 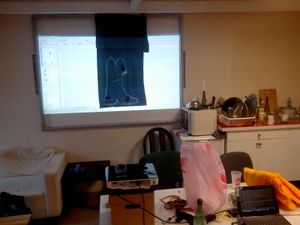 Attempt to project on fabric

However, it is not as convenient as it seemed. The fabric becomes distorted under its own weight, and it is a few centimeters away from the wall. When plotting the outline the lining up change over time. On the other hand, the plotting of a wing on a piece of cardboard was so easy that we decided to cut the patterns and then the fabric. The other advantage is that if (when?) you ever tear up the fabric, you can plot again with the pattern that you stored. Thus, we draw the pattern on a tablecloth roll (nothing else was available at 8:00 PM): 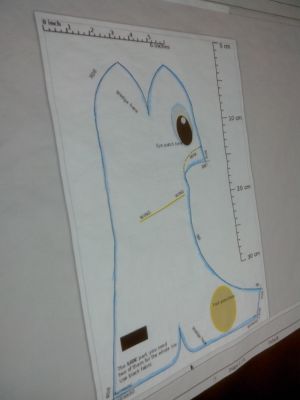 That was much better, but as felt-tip marker would have passed through tablecloth and damaged the hackerspace's white projection screen, we had to deal with unpractical chalk stick.

For the drawing of the XXL version, we invested more money in paper, switching from ultra-cheap tablecloth to 10x1m kraft paper roll. Retrospectively we could have use felt-tip marker, but from habit we used chalk stick. Another problem with chalk is that when copying from paper to fabric you leave traces that can be become mixed up with regular drawing of lines...

Anyhow, this solution works quite well. However, it is very difficult to have the same result twice: it depends on the angle, distance, computer resolution and zoom in the file. That is why you should draw every single piece in one shot. Otherwise, adjust the zoom and keep the same scale. We used la méthode de la Rache. Try also to copy the scale on the paper so that you can correct things later. We had forgotten the derrier of the Tux for v1.1 and we managed to cut one by calculating roughly the ratio (and correcting mistakes when sewing).

For a large size version, that will be used as "advertising mascot" in events with flows of people, we favored resistance and ease of cleaning over aesthetics and softness to the touch. (That would be the opposite if you were to offer a teddy Tux to a child). The price needed to be kept low too: a 5€ difference per meter will result in a 60€ difference in the end.

Boiled wool, as written before, looks good, is quite easy to sew, and rather robust. We even tried to set it on fire (studying security norms drove us crazy): it consumes a little before it dies, so it is perfect. The touch is pleasant, without being as soft as fur, and corresponds visually to what you might expect from a penguin.

The fake fur used for legs and the break in v1.1 is nice but really hard to work with. As it is difficult to unsew we even had to build again some parts. That is possible on a small versions but trickier on 80cm long feet.

The final choice was therefore fleece, but not the cheapest that you can find in a discount store as of v1.1. It was too thin, and between two visits to the store, the furnisher had changed. Therefore, we chosed to do "like professionals" by favoring a more steady supply with a cost slightly higher, but a guarantee of a homogeneous fabric. Now all parts are in fleece, with the same texture and it's fine as it is. 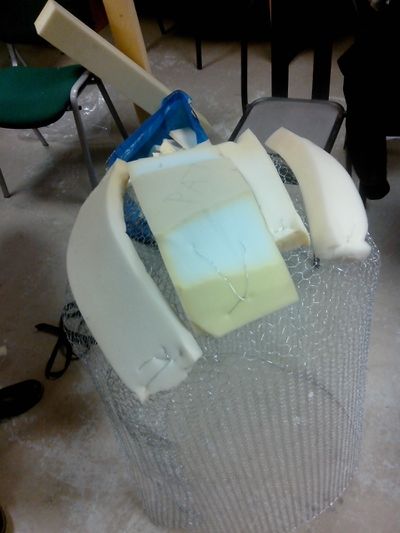 Chicken wire for the head. Foam on the top (not kept in the end).

Many ways of filling our Tux were considered: inflatable baloons, foam, wadding, metal underwiring, chicken fence, newspaper, polystyrene... The biggest problem is that everything is possible, but nothing is perfect. Being able to empty the Tux to store and transport it would be appreciated. But inflating many balloons and adjusting them each time would be a pain in the ass. Straw mixed with foam seems a good solution to get a texture similar to armchair's, but it is far too heavier. Wadding (cotton wool) is very expensive for such a big volume. Long story short, there's not one good way to do it, just pick one and do it.

Chicken fence won, with a small addition of foam, thanks to scraps salvaged from the theater school across the street. We gave advantage to ease (or so we believed...), flexibility and lightness, at the risk of not being able to easily compact the beast. A version 2.1 might one day see the light of day, allowing Tux to travel to distant events. But for the moment we did the best we could to be ready for the Guilde's birthday party (and it worked!).

The head is made of a fence cylinder rounded on the top. An attempt of covering it with foam was made and was latter dropped: the form of the head is much more irregular unless the thickness is perfectly consistent. As you may already have noticed, perfection has never been our thing.

Next, to be able to work on such a big piece, we went to the workshop, where the ceiling height is substantial, and we hanged up the head to the roof. The legs were filled with small chunks of foam, cut with electric knife. We also cut fence for the body (a flared cylinder) and the bottom. The beak is made of two plates of fence cut according to the pattern, then shaped to make a volume.

The different fence parts were tied together with hose clamp. Finally, in order to prevent the tux from collapsing under it's own weight a central pillar was added. This pillar is made with a PVC pipe, slightly shorter than the Tux's height, held upright with pieces of wood.

Note: to simplify the screwing to the base's angle brackets, the PVC pipe was cut 10cm above fixations, then re-assembled with a coupling.

If tutorials proudly advertise that the teddy will be « inexpensive », you can guess that scaling up will not be painless. For a 2.20 meters high v2, count:

Which amounts to 12.80 m without the necessary safety margins (we had 14 m because we did not calculate well...) and that require quite an important budget. As explained before, the fabric for a bigger Tux must be more resistant. That is why the fabric will cost between 8 and 12€ per meter (such fabric is generally sold in 1.5 m wide rolls). The cost for our v2 amount to 170€, just for the fabric.

Add to that the filling, here 40€ for 10m of chicken fence, a zip at the back (1.80 m in our v2, costing about 10€), the first prototypes (it will help to understand how assembly work on a small version because it is very hard on a big ones) and the consumables (yarn, wire, needles that break and wears out, chalk sticks, paper for patterns...). Our final budget is something like 250€.

Beware to the yarn: we consumed more than 100 m of black yarn. It is always annoying to fall short of it at 8pm when you wanted to work all night long.

Beware also to the time you will spend: alone or in pair, this project represents many evenings of work.

After a small training in couture (thank you Julien), the first prototype was quite easy to build. Scaling up made some aspects simpler, so at the start we were very confident in finishing the project, even if the filling part was delayed until the very end in order not to discourage us.

The two main methodological principles were: